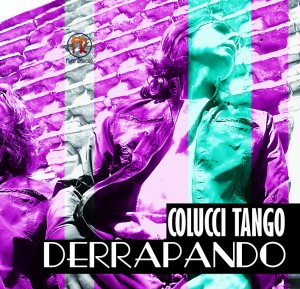 Derrapando is Antonio Colucci’s second album. It is a CD that challenges with an innovative language. It suggests electronic music to tango, and tries to tell tango something about dance. Built on those basis it generates a new sound to listen and to dance.

“I have chosen that name because in Spanish it sounds similar to rapping. In Argentine slang, “derrapando” also means to be on the edge, and that’s what I try to do. I try to push the tango language to the edge, also keeping some links with classical music, but trying to incorporate dance, rap, sometimes “candombe”, depending on the song, but always trying to keep the tango essence.”

It’s a mix of something classic, something new, a powerful sound that astonishes and invites to dance.

Fred Record and EMI invites you to “skid” in Colucci’s universe where the sounds move like the light in a kaleidoscope around the 2*4 rhythm.